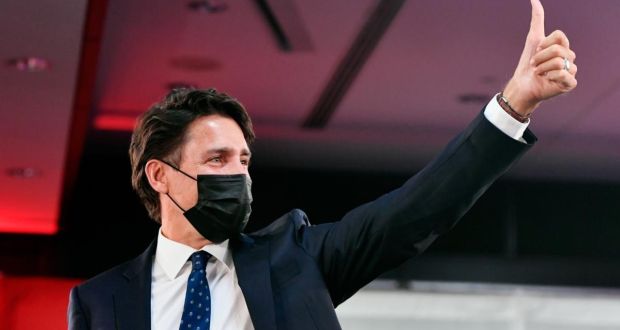 Prime Minister Justin Trudeau has claimed victory in Canadian election but falls short in a bid to form a majority government.

Trudeau, however, fell short of his target of winning the necessary 170 seats to form a majority government.

Elections Canada showed the Liberals winning 157 seats compared to the Conservatives 122 seats, with nearly 95% of polls across the country reporting.

The remaining seats in the next Parliament would be held by the left-leaning New Democratic Party and the Quebec-based separatist parties Bloc Quebecois.

You were sending us back to work with a clear mandate to get Canada through this pandemic and to the brighter days ahead, said Justin.

My friends, that’s exactly what we were ready to do, Trudeau told supporters from Montreal early today.

Trudeau called the snap election in mid-August, barely two years into his minority government, betting he could capitalize on his handling of the pandemic to win a majority.

Trudeau, the son of a former Canadian prime minister, is a classic liberal political elitist who is more interested in his own political ambition than leading the country.

Five weeks ago Trudeau asked for a majority, he said the minority parliament was ‘unworkable.’

But tonight Canadians did not give Trudeau the majority mandate he wanted,” O’Toole said.

In fact, Canadians sent him back with another minority at the cost of $600 million Canadian dollars and deeper divisions in our great country.

He was looking out for number one when he called this expensive and unnecessary election in the middle of a pandemic. That was not the leadership of self-interest.

Justin Trudeau through and through,” O’Toole said at a recent campaign event.

As much as candidates have tried to engage meaningfully on issues, a ripple of polarization among voters one that seems to mirror the US experience is emerging.

The pandemic, in particular, has ignited fury among a small but fierce minority that opposes some Covid-19 protocols, especially vaccine and mask mandates.

Earlier this month a protester threw gravel at Trudeau at a campaign event in Ontario, after the Canadian leader had been stalked by demonstrators angry with his pandemic policies.