The president of NDMA expressed gratitude to the Belarusian delegation and its government for delivering relief to Pakistani flood victims. 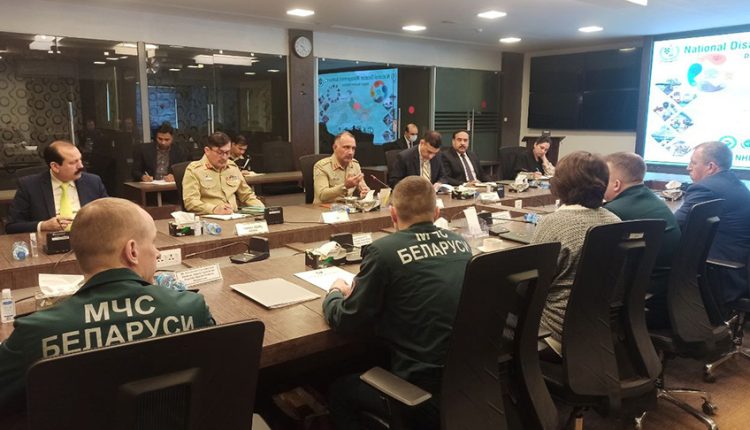 The group from Belarus was led by Major General Bolotov Igor, the Deputy Minister for Emergency Situations. He was accompanied by internal services Colonel Fesenka Siarhei and Lieutenant Colonel Haishun Kanstantin.

The meeting also included Andrei Metelitsa, the ambassador of Belarus to Pakistan. The president of NDMA expressed gratitude to the delegation of Belarus and its government for delivering relief to flood victims in Pakistan.

During the discussion, it was highlighted how the two countries needed to work together in the area of disaster management, particularly through the exchange of specialists so that both parties could benefit from one another’s experiences.

The need for developing an organized regional system to handle the issues brought on by climate change was again stressed by Chairman NDMA.

These include the establishment of academic organizations that include think tanks and researchers, the instruction of disaster managers utilizing the most recent technology-driven modules, and collaboration with foreign partners to obtain funds for the first two parts.

He also mentioned Pakistan’s efforts to switch to a proactive rather than a reactive disaster management strategy.

The leader of the Belarusian delegation, Major General Bolotov Igor, spoke on behalf of the President of Belarus and expressed sympathy for the loss of precious lives brought on by the disastrous floods.

The contingent also pledged complete cooperation from the Belarusian government for disaster management training and the interchange of professionals, authorities, and students.

The primary areas of engagement and collaboration for disaster mitigation and emergency response were agreed upon by both sides. The documents transferring the humanitarian help provided by the Belarusian government were signed by the representatives after the meeting.

Editor at TDI and GNP | mashraf12.ma@gmail.com