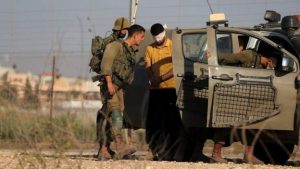 Israeli forces have arrested the last two of six Palestinian prisoners who escaped a maximum-security Israeli prison two weeks ago, closing an intense, embarrassing episode that exposed deep security flaws in Israel and turned the fugitives into Palestinian heroes.

The two men surrendered in Jenin, their hometown in the occupied West Bank, after they were surrounded at a hideout that had been located with the help of “accurate intelligence, said the Israeli military.

It said the men, along with two others who allegedly assisted them, were taken for questioning.

But a spokesman for the Israeli police said the two escapees, Munadil Nafayat and Iham Kamamji, were arrested without resistance.

Clashes broke out as the forces withdrew, with residents hurling rocks and explosives at troops who responded with live fire.

The men dug a hole in the floor of their shared cell undetected over several months and managed to slip past a sleeping prison guard after emerging through a hole outside the facility.

Prime Minister Naftali Bennett praised the various Israeli security forces that worked to recapture the men for “an impressive, sophisticated and quick operation.

Israel considers all six of the men to be terrorists.

Five were from the Islamic Jihad militant group, with four of them serving life sentences, the Israeli military added.

Zubeidi was a militant leader during the second Palestinian uprising in the early 2000s and was well known in Israel both for his militant activity and his love for giving media interviews.

Israeli security forces have been accused of torturing high-profile prisoners in the past, most recently in 2019 after a deadly bombing in the West Bank.

The Shin Bet internal security service said at the time that interrogations are carried out in accordance with the law.

A 1999 Supreme Court ruling forbids torture, but rights groups say it still occurs and that perpetrators are rarely held accountable.