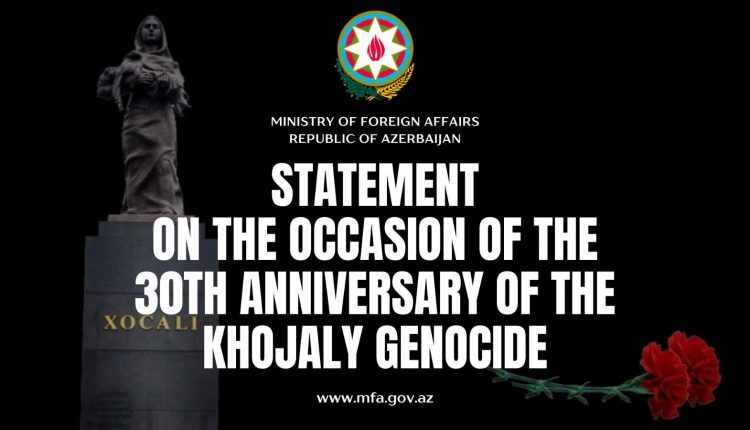 Baku, February 26, 2022 (GNP): Following statement has been issued by the Ministry of Foreign Affairs of the Republic of Azerbaijan on the occasion of the 30th anniversary of the Khojaly Genocide.

Today marks the 30th anniversary of the Khojaly genocide committed by the armed forces of Armenia during the Armenian aggression against Azerbaijan.

One of the gravest crimes committed against the civilian population during the decades of Armenian aggression against Azerbaijan, and the most tragic page of the First Karabakh War, was the destruction of the city of Khojaly and the genocide of its inhabitants. Before the conflict, Khojaly, located in the Karabakh region of Azerbaijan, was home to over 7,000 people: men, women, children, families.

From October 1991, the town was surrounded by the armed forces of Armenia. Overnight, on 25th February 1992, following massive artillery bombardment of Khojaly, the armed forces of Armenia, with the help of the former USSR infantry guards regiment No.366 of which the Armenians constituted the majority, forcibly seized control of Khojaly. Invaders destroyed the city and, with particular brutality, brought violence to its peaceful population.

5,379 inhabitants of the city were forcefully expelled. 613 people, including 63 children, 106 women, and 70 elderly citizens, were brutally murdered. 1,275 were captured and taken hostage and were tortured, and 487 were injured. The fate of 150 of those captured, including 68 women and 26 children, remains unknown to this day. The actions of the armed forces of Armenia tore families apart. Eight families were left with no survivors to speak of. 130 children lost a parent, with a further 25 children left with no surviving parent at all.

The Khojaly massacre and other crimes committed by Armenia in the course of its aggression against the Republic of Azerbaijan, including war crimes, crimes against humanity, and genocide, constitute serious violations of international humanitarian and human rights law. These include violations of the Convention on the Prevention and Punishment of the Crime of Genocide; the Convention against Torture and Other Cruel, Inhuman or Degrading Treatment or Punishment; the International Convention on the Elimination of All Forms of Racial Discrimination and others.

So far, the national legislative bodies of 17 countries, as well as 24 States of the USA, the Organization of Islamic Cooperation, and the Organization of Turkic States have adopted a number of resolutions and decisions condemning the massacre of civilians in Khojaly and characterizing it as a crime against humanity and an act of genocide.

In its judgment of 22 April 2010, the European Court of Human Rights arrived at an important conclusion with respect to the crimes committed in Khojaly, denouncing the behavior of those carrying out the atrocities as “acts of particular gravity which may amount to war crimes or crimes against humanity”.

In a telling admission of culpability, Armenia’s then Defence Minister and ex-President, Serzh Sargsyan, was quoted by the British journalist Thomas de Waal, as saying, “before Khojali, the Azerbaijanis thought that … the Armenians were people who could not raise their hand against the civilian population. We were able to break that [stereotype]” (Thomas de Waal, Black Garden: Armenia and Azerbaijan through Peace and War (New York and London, New York University Press, 2003), p. 172).

Deliberate targeting of the Azerbaijani civilian population continued during military operations conducted by Armenia from September 27 to November 10, 2020. Deliberately targeting the civilian population and civilian infrastructure of Azerbaijani cities such as Ganja, Barda, Terter, which are located at a considerable distance from the war zone, Armenia resorted to the same terror tactics as they had in 1992. This time with the use of modern types of armored vehicles, rocket launchers, and cluster munitions, Armenia once again unlawfully targeted and killed peaceful Azerbaijani civilians.

The Republic of Azerbaijan believes that continuous measures taken at the national level, as well as within the framework of existing international law, will serve to end impunity and bring to justice those responsible for serious crimes committed during Armenia’s aggression against Azerbaijan.

We take this opportunity to remember the victims of the Khojaly massacre and commit their sacrifice to our collective national memory. May they rest in peace.