The second Union Budget of India (FY2020-21) passed by the Modi 2.0 regime has allocated INR 471,378 crore or roughly USD 66 billion for defence and military expenditures. From this amount, roughly USD 16.3 billion has been set aside for defence pensions, overshadowing capital expenditure funds of roughly USD 15.8 billion for acquisitions and force modernisation programmes. The new budget has significantly raised defence pensions by 13.6 percent. If we exclude these pensions, the actual defence budget in FY2020-21 has increased by just 1.8 percent.

In the Revised (FY2019-20) Budget, Indian Air Force was accorded the lion’s share from the three services but compared to FY2020-21, the capital outlay for Indian Army has increased by more than 10 percent for the Army, followed by a 2 percent rise for the Navy. Surprisingly, despite its proclaimed valour against Pakistan at Balakot, the Indian Air Force (IAF) budget has decreased by 2.3 percent from the last year.

However, despite the decrease, IAF still remains the largest force with purchasing power. A sizable portion of this capital is expected to be used for covering costs of Rafale fighter jets procured from France as well as acquisition of indigenously-manufactured Tejas Mk1A aircraft; likely the latter will be accorded preference since India’s incumbent Chief of Air Staff Air Chief Marshal R.K. Bhadauria is a strong advocate of indigenisation. The capital jump for Indian Army is still insufficient to pay for artillery, armour and air defence systems which have been a pressing combat requirement since long. The Indian Navy, on the other hand, seems to have failed in shoring up a suitable budget despite public statements by incumbent Chief of Naval Staff Admiral Karambir Singh; it will remain handicapped in acquiring advanced submarines and the construction of a second indigenous aircraft carrier.

India’s burgeoning defence pension costs provide adequate time and space for Pakistan to develop indigenous solutions as well as encourage transfer of technologies from friendly countries, particularly China and certain European countries. Pakistan has so far made up for its lack of conventional firepower superiority by improving the potency and accuracy of its strategic arsenal. This pragmatic course of action has, however, not reduced the international political and diplomatic pressure to rein in what many proclaim is a ‘growing’ and ‘unjustified’ nuclear stockpile.

The new defence budget can impact the Indian Army’s offensive combat capabilities and the Indian Navy’s strategic ambition to attain dominance of the high seas in pursuit of the Washington-led ‘Indo-Pacific’ strategy. Therefore, although Indian Armed Forces’ modernisation remains a distant dream, the lack of hardware can be compensated through diversion of funds to build-up integrated tri-services capabilities in the Cyber, Outer Space and Special Operations domains. 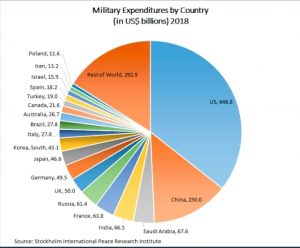 The Indian Navy is to receive $4.56 billion, which is expected to help cover the cost of leasing a nuclear submarine and stealth frigates from Russia, as well as pay for warships from Indian companies. A Navy official said it is unlikely the service will be able to sign a contract for 24 MH-60R multirole helicopters for more than $2 billion from the U.S. next year.

India’s recent announcement implies 9.4% increase comapred to 2019 and that stands at 15.49% of Total expenditure which makes Indian Military expenditure in the world’s at 4th number. India, thus, is creating conventional disbalance in the region to challange Pakistan and China even in the time of Global Crisis.