Bilateral Participation of the Friendship across Mountains and Sea Events Online, Deepened Mutual Exchanges and Cooperation in Interested Sectors 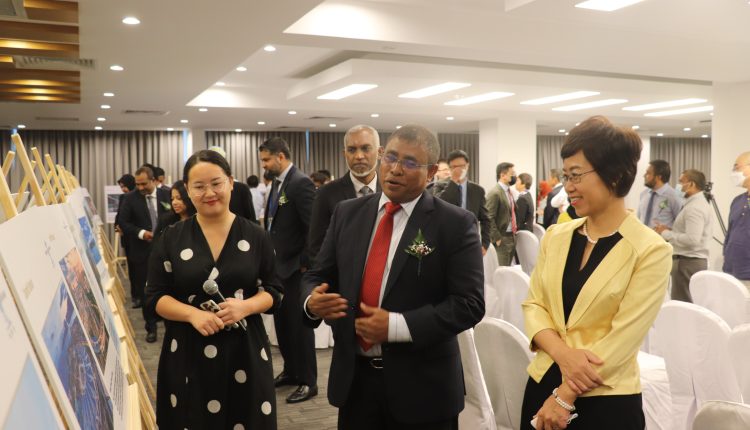 Male, 13 October 2022 (GNP): “Friendship Across Mountains and Sea” events celebrating the 50th anniversary of diplomatic relations between China and Maldives were officially kicked off in Male, Maldives, on October 12, 2022. 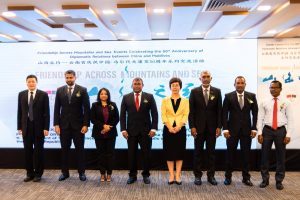 A series of activities, such as a photography exhibition, video broadcast, and culture week, will be launched offline simultaneously in Yunnan, China and Maldives so that people in both Yunnan and Maldives celebrate the 50th anniversary of diplomatic relations between China and Maldives, and promote the profound friendship between both sides.

As the province of China closest to the Maldives, Yunnan first established a connection with the Maldives due to seashells. Though shells were not produced on the Yunnan-Guizhou Plateau, the history of using shellfish coins in Yunnan lasted until the late Ming and early Qing Dynasties. As indicated in the textual research, some shellfish coins came from the Maldives.

In ancient times, Maldives shells were transported by sea to all parts of Asia and Africa, including the coast of India. From India, Maldives seashells entered Southeast Asia by land and eventually arrived in Yunnan, China, establishing an unknown bond across mountains and seas.

In addition to seashells, 600 years ago, Mr. Zheng He, a voyager born in Yunnan in the Ming Dynasty, led a fleet to the Maldives twice, and the King of Maldives also deployed envoys to China many times, which truly opened the history of friendly exchanges between the two peoples.

In recent years, the two sides have maintained close high-level exchanges. Senior government officials have visited Yunnan many times, attending events like China-South Asia Exposition and China-South Asia Cooperation Forum. In addition, many governments and commercial delegations from Yunnan have also arranged to visit the Maldives.

With the joint efforts of both sides, Yunnan has set up Yunnan Commercial Representative Office in Male, Maldives, and established the cooperative working group mechanism with the Ministry of Economic Development, the Maldives, building a new communication platform for both sides in the trade, investment, tourism and other sectors.

In 2017, the maiden flight from Kunming to Male was completed. The opening of the direct flight from Yunnan to the Maldives has dramatically facilitated the bilateral economic, trade, and personnel exchanges.

Both Yunnan and Maldives enjoy rich tourism resources. The colorful Yunnan, with its beautiful mountain landscapes, and the Maldives, with fantastic sea views like the Pearl of the Indian Ocean, are world-class and top tourist destinations.

In May 2016, the Maldives-Yunnan B2B Travel Fair was held in Kunming. At the Fair, experts in the travel industry conducted in-depth exchanges and discussions on issues of common interest, including mutual promotion of tourists, tourist services, resort management, and tourism marketing, promoting mutual learning in the tourism sector, and laying a solid foundation for bilateral further tourism exchange and cooperation.

With the deepening of cooperation and exchanges between both sides, many travel agencies and trade companies of Maldives show strong interest in green food resources in Yunnan. For this purpose, the 2019 Maldives Enterprises – Yunnan Enterprises Eco-friendly Food and Tourism Cooperation Promotion Activities was held.

Representatives from 13 Maldives enterprises conducted exchanges with local agricultural enterprises in Yunnan and signed purchase agreements with Yunnan enterprises specialized in vegetables, fruits, coffee, and other agrarian specialty foods. As mentioned by Hussain Moosa, head of the Maldives Enterprise Delegation, due to the limitation by the natural conditions, flowers, fruits and vegetables rely on imports in the Maldives; the abundant fruit and vegetable resources of Yunnan can just meet the demands of Maldives.

The lasting friendship between both sides is across mountains and seas. In recent years, fruitful achievements have been made between Yunnan and Maldives in the economy, trade, tourism, education, and infrastructure construction. As shown in statistical data, in 2021, the bilateral trade volume reached USD 5.15 million, seeing year-on-year growth of 189%.

By taking the 50th anniversary of diplomatic relations between China and Maldives as an opportunity, both sides will continue to join hands to promote mutual friendship and trust, extend cooperation and improve the cooperation level to push Yunnan-Maldives relations to a new level, and deepen the bilateral friendship along the ancient Maritime Silk Road.