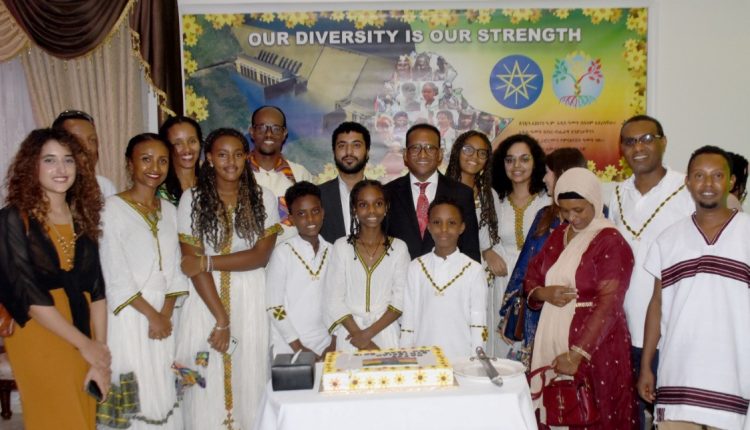 Islamabad, 10 September 2022 (GNP): Embassy of Ethiopia to Pakistan celebrated the Ethiopian New Year in Islamabad by hosting a reception.

High Commissioner Jemal Beker Abdula hosted a reception on the eve of the Ethiopian New Year and National Unity Day at his country’s newly established high commission in Islamabad to celebrate the occasion.

While speaking on occasion, Ambassador said that Ethiopia and Pakistan enjoy strong diplomatic ties. Ambassador also highlighted the contours and significance of the celebration of the new year and the Unity Day celebration across Ethiopia.

On September 10 or 11, each year, Ethiopians across the world celebrate the new year. The official festival organizing committee led by the Director General of the Ministry of defense’s public relations directorate and the Chairman of the festival’s organizing committee announced in Addis Ababa that this year all the global Ethiopian Embassies would also celebrate “Unity Day” on September 10, 2022. Globally 52 Embassies are celebrating this important event.

The new year celebrates the great Ethiopian nation’s love, forgiveness, unity, and harmony hallmark. These celebrations also signify the country’s unique position in the world’s history and the diversity spreading across the country. This is also considered Ethiopian strength and wealth, which UNESCO has also recognized.

Ethiopia has its alphabetic-Geez, a unique calendar system with 13 months—12 months of 30 days and a 13th month having 5-days that count six every four years to make up for a leap year.

The Ambassador of Ethiopia said that a  gap of seven to eight years between the Ethiopian and Gregorian calendars results from an alternate calculation in determining the date of the Annunciation. 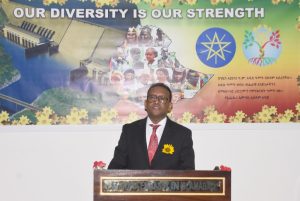 National Unity Day is celebrated in Ethiopia in honor of the National Defence Forces, the epitome of unity, and the preservation of Ethiopia’s sovereignty and territorial integrity as a unified state. The main theme of this day is “Our Diversity is our wealth and strength.”

While highlighting the significance of the National Unity Day, Ambassador said that this day is a metaphor that reflects the strong multi-ethnic religions, gender, ideas, cohesion, and harmony among the citizens of Ethiopia and all the nations and nationalities living in the country.

He added that as a result of this beautiful day, Ethiopians could perform the miracle of togetherness and lead the nation to peace and prosperity.

Ambassador highlighted the strong Pakistan and Ethiopia ties and that this is the first embassy that Ethiopia has opened here in Pakistan after the 75 years of independence of Pakistan. Ambassador hoped that the bilateral relations between Ethiopia and Pakistan would grow steadily as both the countries shared similar cultures, sights, and many other things.

Ambassador invited the participants from far and wide to visit Ethiopia and see the majestic mountain range in the country, as half of the mountain in Africa is located in Ethiopia.

Ambassador said that Ethiopia is a land of Origin, the Lucy, the human fossil that is believed to be the first human, the Land of Coffee, where coffee gets its name from the place called Keffa, and the source of the Nile, the longest river in the world. Another reason Ethiopia is famous around the world is running.

The ambassador said Ethiopia had produced some of the best athletes in the world. Moreover, he said Ethiopia is a land of wonder, archeology, nature, and contrast nature.

The Ambassador said since he arrived in Pakistan, he was highly moved by the hospitality, generosity, and sincerity of the people of Pakistan. Since his arrival in Pakistan, Ambassador and his colleagues receive warmth and hospitality, which is the hallmark of the Pakistani people.

On behalf of his government and the people, the Ethiopian Ambassador conveyed his heartfelt condolences to Pakistan’s people and the government on the catastrophic floods that affected lives, properties, roads, and infrastructure.

Ambassador highlighted that although Pakistan contributed little to the climate crisis but is suffering much, he said the people of Ethiopia and the government always stood by their brotherly country.

The event was attended by Ethiopian nationals working in different international organizations, Ambassadors, diplomats, journalists, and other media representatives, including the Director of Africa Desk, Foreign Office of Pakistan, Dr. Arshad Abbasi. He attended the reception and congratulated him on this auspicious day and welcomed his family and the staff of the Ethiopian mission in Pakistan.