Mushaal Mullick call for unity, actions to save humanity in IoK

Mushaal Hussein Mullick, Wife of Hurriat Leader, Yasin Malik on Wednesday call upon all political parties to get united for cause of Kashmir and urge the people of Pakistan to stand up and raise their voices to save humanity in Indian occupied Kashmir (IoK). She said mere reports, statements and condemnations are not enough at this time, as it is about time to take serious actions.

She was expressing these views during a seminar titled “Change in Kashmir’s Constitutional Status and Pakistan’s Option”, organised by the Sustainable Development Policy Institute (SDPI) here at Islamabad.

Mushaal Hussein Mullick, while raising grave concerns over health of her Husband detained in Tehar (India) jail said that there is historic blackout and complete siege in the IoK, and there is blood ever where on the roads. “A full fledge war has been imposed on the Kashmiris in the valley after fake presidential order by India to revoke article 370 and 35A, where innocent people are brutally murdered and women are being rapped publically”, she said added now India has broken all so called legal relation with IoK, and superseded the UN resolutions on Kashmir dispute and even its own constitution. “The whole world is callously watching the grave human rights violation of Kashmiris, as there is complete silence from the international community and media, she lamented added we need regress policy measures and support at all levels.

Mushaal while expressing her disappointment over behavior of all political parties in Pakistan, said amid current Kashmir crisis there was no big demonstrations organised in support of Kashmiri people by most of the political parties. “Kashmiri people just need hope, courage and a sense of belonging from the people of Pakistan” she said.

Romina Khurshid Alam, PMLN MNA said it’s a moment of pain and sorrow for the whole world, where Indian state terrorism has crossed all lines and limits. “For me Kashmir issue is beyond religion and beyond Muslim, as Kashmir is the issue of humanity”, she said added Indian state has become more tyrant and oppressor. She termed India a ‘butcher state’ over atrocities and state terrorism in IoK. She said that the freedom struggle of Kashmiris cannot be suppressed as Kashmiris has given a lot of their blood to this freedom struggle, which cannot go in vain.

“Now India has reached to our jugular vein and time has come to take action”, she said added all the political forces and institution should get united for the cause of Kashmir and immediate steps on all diplomatic fronts need to be taken.

General (R) Amjad Shoaib, Defence Analyst said due to week diplomatic strategies and measures, we have been failed to convince the internal community on our sacrifices and efforts to fight terrorism. “Despite suffering the loss of more than 70 thousand innocent civilian causalities to terrorism, Pakistan failed to realize the world for its contribution, whereas, India was successful in portraying Pakistan as a terrorist state” he said added Pakistan should enhance its political and diplomatic efforts and a full fledge campaign should immediately launch to sensitize the world over human rights violations by the Indian Army in the occupied valley.

Farzana Yaqoob, Former Minister for Social Welfare and Women Development, Azad Jammu and Kashmir (AJK) said the political leadership of Pakistan and especially the incumbent government should develop clarity and own the actions adopted by the state of Pakistan over the issue of Kashmir.  “We the people of Kashmir need encouragement, strength and resolve that Pakistan is with us” she said added Pakistan must geared up its diplomatic efforts on war footing. Farzana said that we all need to stop playing politics on the cause of Kashmir, as Kashmiris has no choice but to fight or die. “Even a little child of Kashmir preferred to die over accession to India” she said added every Kashmiri wanted accession with Pakistan and preferred to be buried in the flag of Pakistan. She urged the government to engage the Kashmiri people in every committee, forum, negotiations or talks over Kashmir issue, as no other but only Kashmiris can tell what they wanted.

Major General (R) Ijaz Hussain Awan, Defence Analyst said bilateralism has been buried between India and Pakistan, as India always run off from the bilateral talks over Kashmir dispute. While denying the notion that Pakistan has lack clarity on the actions, he said that Pakistan as a state is very clear on the actions and position taken on Kashmir issue. “Revoking 370 clause of the constitution by Indian government was a surprise for us and for the world, as India deceived their own people and international community”, he said added third party intervention over Kashmir dispute is the only win-win solution and way forward for both countries, as bilateralism has failed. He said that Pakistan should exhaust all diplomatic options and must prepare for the worse.

Moazzam Sharif Bhatti, Director Advocacy & Outreach, SDPI while strongly condemning the Indian aggressive move to scrap the special constitutional status of the IoK by removing article 370 and 35A said every human being is feeling the pain of Kashmiris, who are being brutally tortured and murdered by Indian state terrorism. “The government of Pakistan should immediately engage and take all political stakeholders on board and geared-up efforts at the diplomatic level to shake the international community on the grave situation in the IoK”, he said. Dr Nathalene, Historian and Research Fellow, SDPI in the beginning give the historic perspective of the Kashmir crisis that led to the recent development of revoking the article 370 and 35A. 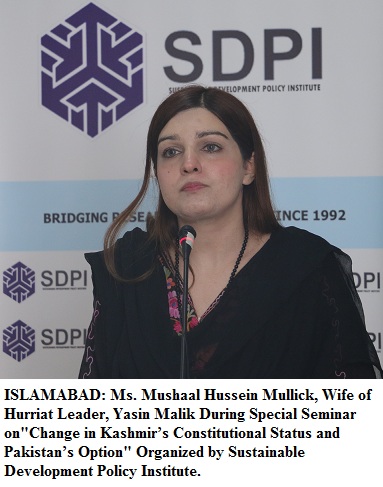 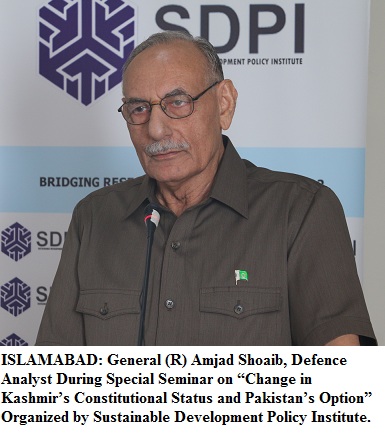 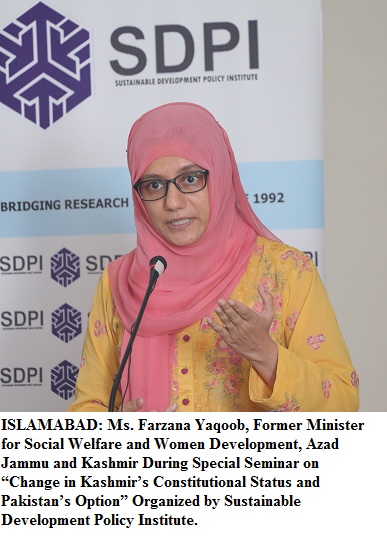 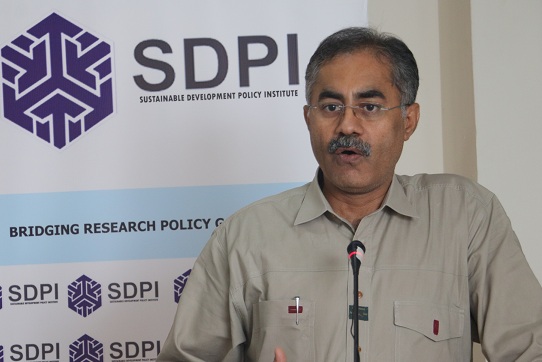