Indian Military Spending and its Economy

Indian defence budget is sky rocketing since the inception of Modi-led NDA government in 2014. The Indian defence budget has seen sharp increase especially in last three years. Modi government is justifying the increase in budget with mounting threats from Pakistan and attack across the Line of Control (LoC). Interestingly, as Modi-led central government continues to pick pieces in the puzzle to rein in the coronavirus pandemic in India, the economic costs of the nationwide lockdown on millions of poor could be catastrophic. Projections based on a recent analysis by researchers at the United Nations University (UNU) shows that, in the worst case scenario, 104 million more people in India could fall below the World Bank-determined poverty line of $3.2 a day for lower-middle-income countries. At present, 60 per cent of India’s population, or an estimated 812 million people, live below that poverty line. The figures are alarming for Indian government. But, the authorities are not paying heed to these warnings. The consequences could have been beyond one’s imagination.

With an expenditure of $71.1 billion in 2019, India has emerged as the third largest military spender in the world, just behind the USA and China. In a report, Swedish think-tank Stockholm International Peace Research Institute (SIPRI) said India’s expenditure grew by 6.8 per cent from 2018 and the country climbed up the rankings from its earlier fourth spot. Though, Titled Trends in World Military Expenditure, 2019, the annual report said India’s tensions and rivalry with Pakistan and China were among the major drivers for its increased military spending, but practically this is not true. This is the first time that the two Asian states China and India have featured among the top three military spenders.

India’s military expenses have risen significantly over the past few decades. Over the 30-year period between 1990 and 2019, its spending grew by 259 per cent. In 2010-19 decade, the expenses grew by 37 per cent, the report said. Indian Army is spending more amount of its budget in Indian Occupied Kashmir to target innocent civilians. Indian Armed forces are increasing their strength and troops in Kashmir aimed at suppressing the freedom struggle of Kashmiris. It is pertinent to mention here that Indian military build-up is jeopardizing the entire regional peace. The crisis of WWIII are looming over the region due to the Indian warmongering designs. Any Indian miscalculation could trigger another catastrophic incident. The people of both India and Pakistan will suffer unthinkable consequences in case of war. India’s Hindu fanatics are in government and they are least interested in peace. 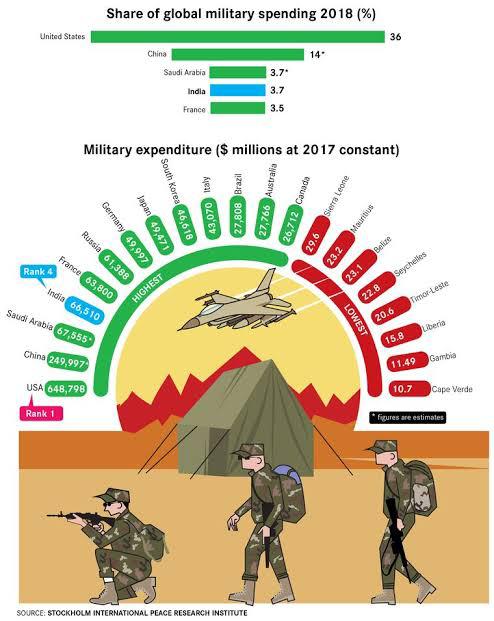 At the end, I would must say here that Indian government should follow the path of Pakistani government to deal with poverty instead of military modernization. The increasing military might left its people far behind. They are forces to live under the trembling conditions. Indian people are committing suicides due to poverty. Millions of people are still no access to the basic facilities in India. This is the best chance for Indian government to allocate more budget to fight these unconventional threats. If it doesn’t fight this enemy, its people are likely to suffer more poverty and dire economic conditions. Economic development is in the interests of entire region. Bilateral cooperation of India and Pakistan will lead towards the economic uplift of this region. Indian should come out and cooperate with Pakistan on the economic front as it will enhance its own economy. Any Indian misadventure will further endanger its own political, economic and strategic interests.

Journalism Is Not A Crime? Well, in Indian Occupied Kashmir, it is.