Estonia government decided to support both Spain and Italy with EUR 100,000. Estonia supports the mitigation of COVID-19 impact through the International Red Cross in the countries facing the biggest coronavirus crisis in Europe.

At this difficult time, we must express our solidarity with those countries that have suffered the most from the spread of the coronavirus in Europe. Spain and Italy have requested assistance from their allies, and Estonia, together with other NATO Member States, has decided to offer them the help they need,” said Prime Minister Jüri Ratas.

“Both Italy and Spain that have repeatedly demonstrated their solidarity and contributed to the security of the Alliance and our region by participating in NATO battle groups, air policing in the Baltic states, and in the NATO Cooperative Cyber Defence Centre of Excellence in Tallinn. Therefore, is quite evident, that Estonia supports them in this difficult time for of our allies,” said the Prime Minister. The Italian and Spanish Defence Forces have a constant presence in our region. Spain will take over the Baltic Air Policing Mission in May.

The Minister of Foreign Affairs, Urmas Reinsalu spoke by telephone with his colleagues from Italy and Spain, and informed both countries of the support provided through the International Red Cross and help with personal protective equipment. The Foreign Ministers of both countries thanked Estonia for the assistance on behalf of their people and assured that their countries and nations will not forget this help.

Estonia will allocate EUR 100,000 to both countries via the International Red Cross to control the spread of the coronavirus. Estonia also sends 30,000 face mask and 2,000 units of disinfectant manufactured by the local producer Nordic Group OÜ to both countries.

Similarly to Estonia, several NATO allies and EU Member States have responded to requests for assistance from Italy and Spain. Lithuania is also planning to send assistance to Spain: the first Spanish plane leaves from Šiauliai on April 21. The assistance will be delivered by Spanish military logistics, which participates in the Air Policing Mission of the Baltic States in Šiauliai. The Czech Republic sent 10,000 protective suits both to Italy and Spain. Denmark sent ventilators and a field hospital to Italy. Luxembourg gave Spain 1,440 kilograms of medical protective material. Germany has sent several tons of materials to Spain, including 5000 ventilators, and has brought patients in serious conditions with military aircraft from Italy to Germany. Turkey has donated personal protective equipment and disinfectants to Spain and Italy, including 450,000 protective masks. Poland sent 15, and Albania 30 doctors to help Italy.

The number of registered cases of coronavirus across the world is approaching two million. Italy and Spain are currently ranking among the first three countries in the world’s statistics on infection, and mortality is still increasing.

Spain submitted a request for assistance on March 24, and Italy on March 26, through the NATO Euro-Atlantic Disaster Response Coordination Centre (EADRCC), where they provided detailed information on material shortages and the necessary equipment to fight the virus. Consignments of masks and disinfectants should reach Italy and Spain next week the latest. 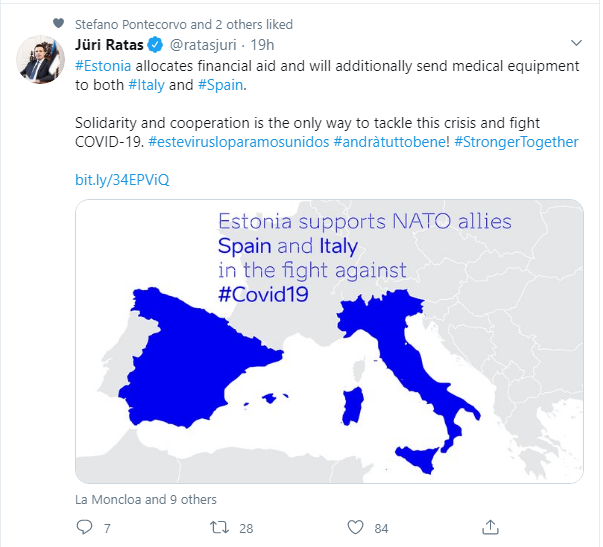 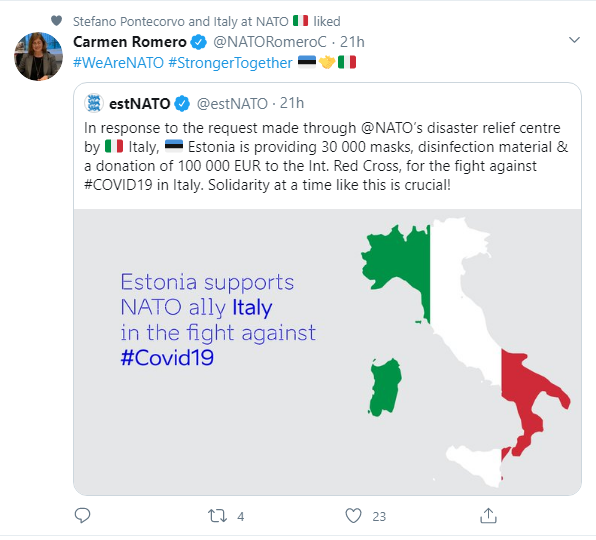 Netherland deployment of defence in the fight against corona-virus