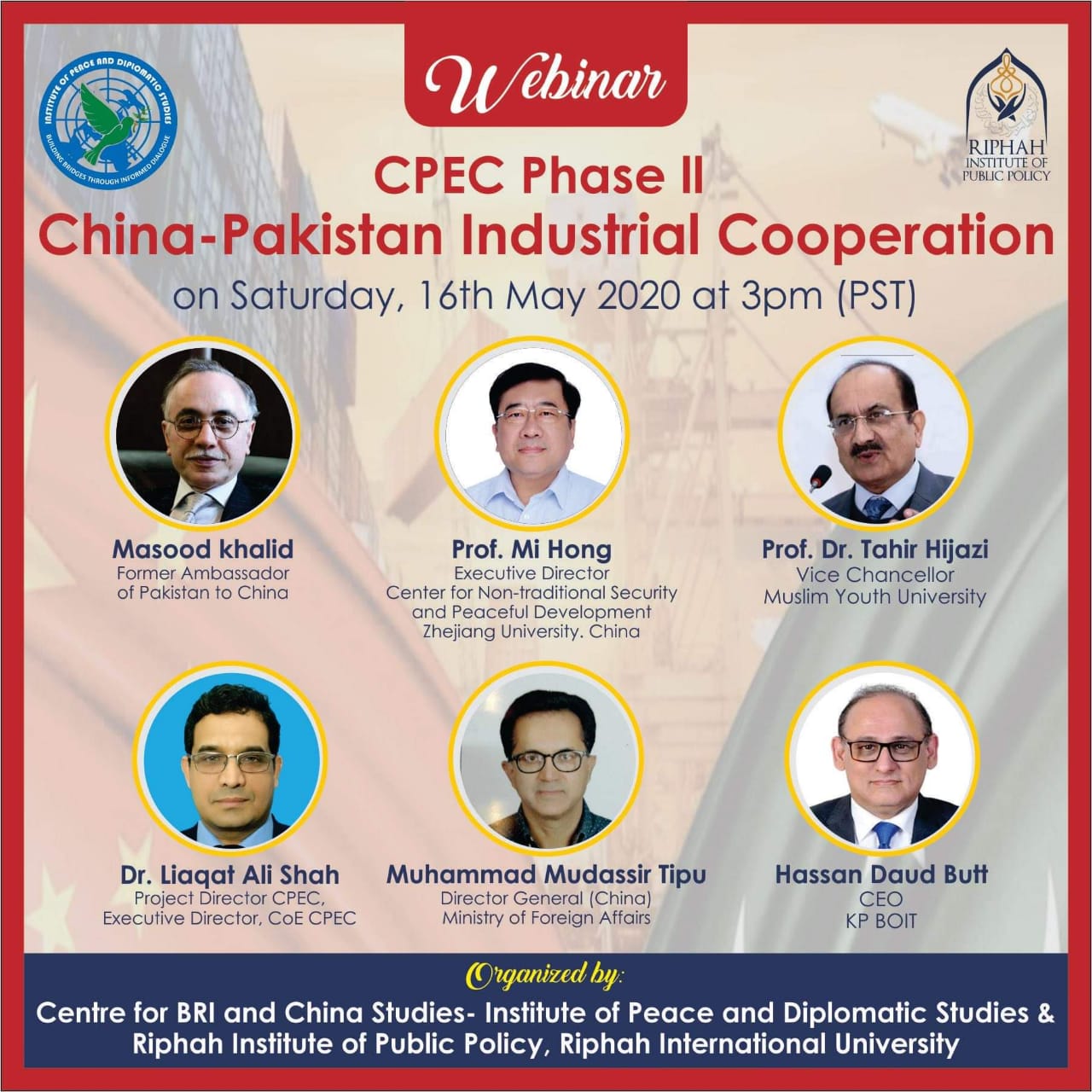 Farhat Asif, Director Institute of Peace and Diplomatic Studies welcomed all the participants in the webinar. Dr Rashid Aftab highlighted the significance of BRI and its flagship project CPEC and said CPEC is not only the economic project for both of the countries but also project of energy security, human development, national integration, international integration and project of collaboration in scientific technology. It would be the real game-changer for whole region. Moreover, he added Chinese government will invest $1.3 trillion up-to-the 2037

Ambassador Masood Khalid highlighted the significance of CPEC for Pakistan by adding that; Economic sector, Energy sector Gwadar port and industrial sector will boost-up through this project. Moreover, he said in its second and third phases which is likely to be conclude in 2030 many other sectors will also be part of that flagship project such as, agriculture sector, tourism sector and science and technology sector. He added further by saying before this project, no country was ready to invest in Pakistan but it was China who invested in Pakistan and many crises from which Pakistan was confronted are somehow resolved now. For instance, in the energy sector, no MNCs were ready to invest because of the Energy crisis in Pakistan. Furthermore, he said the projects of CPEC comprised short term, medium-term and long term projects.

Professor Dr Mi Hong commenced his speech by thanking all audience and talked about the Urbanization and Cultural linkages between the people of Pakistan’s side border and Chinese sides of border. Furthermore, he encourages cooperation between both of the countries in various sectors including in medical sectors food and Agriculture security and research sector. He further highlighted the pandemic hysteria and strongly encouraged both countries to take part in the prevention of viruses and other medical diseases

Mudassir Tipu initiated his speech by highlighted the PM’s first priority which is the early completion of CPEC and further added the recent Chinese health silk route in which china is helping almost half of the world and Pakistan on priority bases. Moreover, he said the current situation is very tough for both BRI and CPEC. He also said how China transformed its society in last five decades and he is very optimistic about the transformation of Pakistan after the completion of this project.

Dr Tahir Hijazi in his speech highlighting the historical perspective of CPEC by saying CPEC wasn’t started in 2013 but in the 80s from the construction of Karakurm highway although before this there wasn’t any road linkage between both of the countries they traveled by air only. He further added, Beijing is also connected  to the Islamabad by fiber optics of Internet and he also share slides with the audience to depict how the employed rate is increased and it was only possible due to this flagship project. Moreover, he highlighted not only the encouragement of investment in the energy sector but also gave the answer to many critiques who dubbed this project as a debt trap by saying there is no political motive behind this project it will beneficial for both of the countries.

Hassan Daud discussed the projects in energy sectors and recommended the government to diversify their energy basket though this the inflow of FDI will increase. He was disappointed from the research community he said there is no policy paper are coming from research so that they can predict the future of this project but he also gave some recommendations for which he encouraged the government to start investing in this sector after the pandemic which includes;

He concluded his speech by saying Chinese government should invest in another sector such as mines agriculture and prepare itself to counter the wrong perceptions from adversaries.

Li Bijian initiated his speech by pinpointing a very important point which is the security environment in Pakistan and recommend the government of Pakistan to works in the security environment so that many foreign investors contribute to the growth of Pakistan. Furthermore, he also questioned the continuity policy of Pakistan’s government and recommends the national charter from all those major stakeholders in Pakistan for the uniform policy of this project so that it doesn’t matter which government it is.

Dr Liaqat Ali Shah highlighting the recent development in which government of Pakistan allotted the land for many economic and energy projects and encourage the uniform industrial policy. Moreover, he said post COVID-19 challenges will be tough for government and he talked about the role of a state and said the role of the state should be of facilitator not as police and army.

While on concluding remarks Farhat Asif, Director Institute of Peace and Diplomatic Studies, Islamabad and moderator of the session thanks to all the distinguished guests for sharing their valuable thoughts.

Pakistani Hindus under Sighs in India

Terrorism as Excuse in Kashmir