A brief Report on Pakistan China Free Trade Agreement (FTA): Where we are and where we are going?

Islamabad (Monday, August 05, 2019): Experts and practitioners on Monday call upon the government to build its export capacity to cater the demand of Chinese markets at competitive pricing, amid finalization of second phase of Free Trade Agreement (FTA) between Pakistan and China.  They termed the FTA as a silver lining for Pakistan’s economy and splendid opportunity for both countries.

The seminar titled “Pakistan China Free Trade Agreement (FTA): Where we are and where we are going?” was organised by the Sustainable Development Policy Institute (SDPI) here at Islamabad.

Speaking on the occasion, Dr. Wang Zhihua, Minister Counselor, Economic and Commercial Section, Chinese Embassy in Pakistan said though trade volume between Pakistan and China has increased over the years but trading imbalance remained the biggest challenge and concerned by the Pakistani government and the business community. “The main reason behind the trade imbalance between the two countries was of structural in nature, where China has strong manufacturing base to export goods as compared to import” he said added the finalization of second phase of Free Trade Agreement (FTA) between two countries on the sideline of second Belt and Road Forum will help resolve these issues and strengthen further bilateral trade ties. Dr Zhihua argued that as per phase two FTA, China has agreed to eliminate duties on more than 300 products, especially in the agriculture sector, where Pakistan has the potential to expand its export basket to China. He said China also encourage more business to business interaction activities in China to help Pakistani business community to learn more about Chinese demand and needs. “We hoped that the incumbent government will adopt new industrial policy at the earliest to help improve business environment and ease of doing business”, he said added this will also help Chinese investors to bring more investments which will also help build manufacturing capacity of the country.

Project Director and Focal Person for CPEC, Hassan Daud Butt said the previous two FTAs could not yield the desired results, hence, pave the way for another revised agreement for the mutual benefit of both Pakistan and China. “In the previous FTAs between China and Pakistan, there were no safeguard measures for industries, no synergy between relevant institutions, balance of payment vision was not incorporated, and no data exchange policy was agreed to counter under-invoicing issues”, he said added the revised FTA with China has incorporated all these factors to make the commercial relationships beneficial for both countries. He also argued that due to lack of efficiency and relatively lower productivity of human resource, Pakistan was lagging behind in the race of competitiveness as compared to its peer countries in the region and internationally. He stressed the need for enhanced efficiency and urged the business community to initiate joint ventures with the Chinese businesses.

In her opening remarks Dr Hina Aslam, Head of China Study Center, SDPI said that even though Pakistan and China had signed two FTAs already — one in 2006 on trade in goods and the other in trade in services in 2009 — but their impact has been less than salutary on Pakistan’s economy. “Under the revised FTA, China has agreed to provide duty free access and unilateral concession to 313 Pakistani product lines (an increase of 257 tariff lines) over the next fifteen years. Moreover, under the new FTA, Pakistan would commission approximately 65% of its market with Chinese exports, whereas China would open up 90% of its market for Pakistani exports”, she said added this would also help in remedying the colossal trade deficit between the two countries, which was around $10 billion last year.

Dr Hina said that amidst the national and global economic tranquility, the culmination of second phase of Free Trade Agreement is none less than a silver lining for Pakistan’s economy. “China’s annual imports figure stands at $2 trillion, whereas $64 billion of its imports are what Pakistan produces”, she said added if Pakistan manages to capture 10% share of those $64 billion Chinese imports, it can experience a significant increment in exports – reaching up to $6.5 billion.

Mustafa Hyder Sayed, Executive Director, The Pakistan-China Institute, Islamabad stressed the need for changing mindset when it comes to trade with China. “We always look for concessions, favours and grants, whereas, we failed to developed our own market and industries” he said added the government of Pakistan and business community must fundamentally change the mindset and thinking towards China and other trade destinations.  He argued that there is no preparedness on the list of products by our businesses and the government which could compete internationally. “Pakistan needs to improve its regulatory environment and need to ensure the ease of doing business to attract investments”, he added. 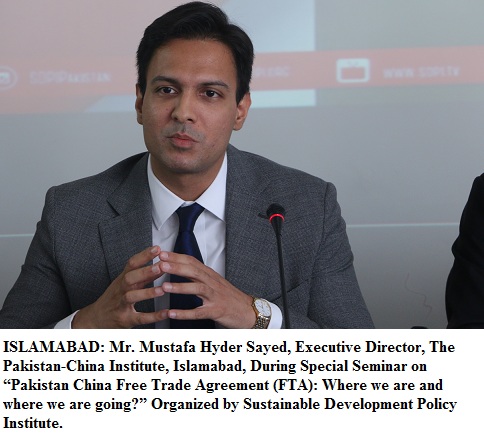 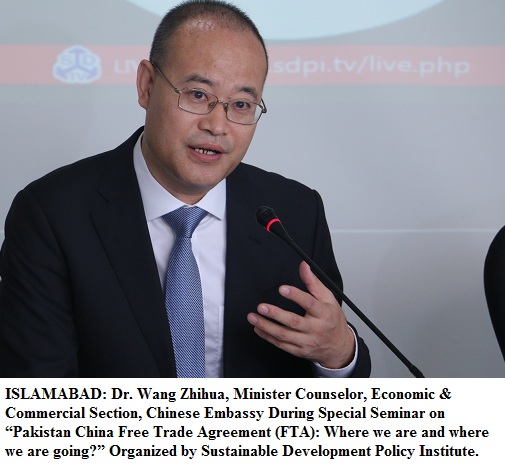 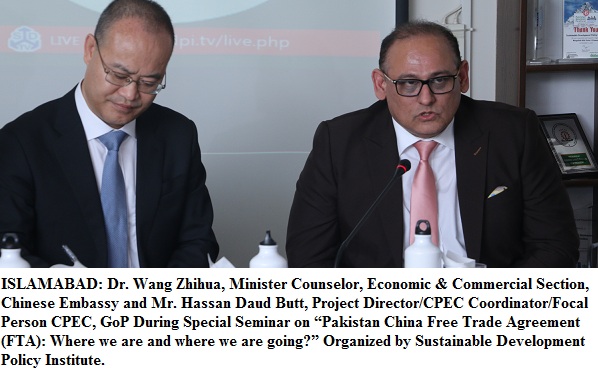