WHO lauds Government of Pakistan for its preparedness and response to the recent public health emergency following heavy snow, avalanche

Pakistan, 5 February 2020 (GNP) :
World Health Organization (WHO) lauds the Government of Pakistan and the Ministry of National Services Regulations and Coordination for taking prompt measures and timely action to provide relief to the people who suffered loss of life and property in the wake of recent heavy snow and severe weather conditions in Azad Jammu and Kashmir and other parts of the country. 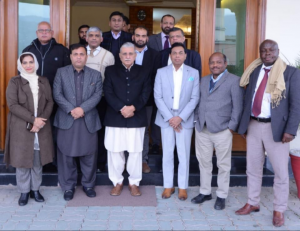 Appreciating the timely response of the government, Dr Palitha Mahipala, WHO Country Representative in Pakistan, assured WHO’s support to the government of Pakistan to respond to this public health emergency.
Living up to the expectations, WHO provided 11 International Emergency Health Kits (IEHK) with each kit covering 3000 population for one month, in addition to this a complete set of equipment & supplies were provided for three mother, child health / Labour room, tents for temporary installments, and personal protective equipment’s for protection against Corona Virus.
It may be added here that several parts of Pakistan came under a spell of heavy rain, snowfall, flash floods, avalanches and landslides, between 11 and 12 January 2020. The districts adversely affected were located in Balochistan, Khyber Pakhtunkhwa, Gilgit-Baltistan, and Azad Jammu and Kashmir (AJK). This resulted in geographical access constraints to the affected areas, delaying rescue and relief operation which exacerbated the situation of the affected people.
In AJK, snowfall and avalanches affected mainly 4 villages namely Sargan, Bakwali, Sargan Sairi and Dudniyal, whereby 14,000 population were affected directly with approx. 2,118 households and 41,007 indirect population with 6,046 households were affected. More than 100 households were displaced to relatives or neighborhood.
Balochistan Provincial Disaster Management Authority (PDMA) reported 21 deaths, 24 injuries and 1,062 houses damaged, while 8,216 hectares’ agriculture land damaged. 15 districts (37 Tehsils & 130 UCs) in the northern part of the province were severely affected by the snowfall and cold, while 5 districts in the south are affected by rainfall only, amongst which district Kech has had flash floods.
In Khyber Pakhtunkhwa, the total death toll reported was 5 and 13 others were reported injured. Total 33 house were damaged – 18 completely and 15 were partially damaged. According to the Provincial Disaster Management Authority of KP; 3 districts of Mardan, Swat and Upper Dir have been affected.
It is pertinent to mention here that Dr Palitha Mahipala, WHO Representative in Pakistan, along with WHO team visited Muzaffarabad twice to hand over emergency supplies and equipment to the Prime Minister of AJK to respond to the public health emergency in AJK. Speaker AJK Assembly, Minister for Population AJK and Commandant were also present on the occasion. The honourable Prime Minister of AJK appreciated the generous donation by WHO and thanked Dr Palitha Mahipala for extending unconditional and timely support to the people of AJK! (GNP)

government of PakistanMinistry of National Services Regulations and CoordinationWHO
232
Share

Students in China After Coronavirus attacks there