Umar Sharif admitted to hospital in Germany after health deteriorates 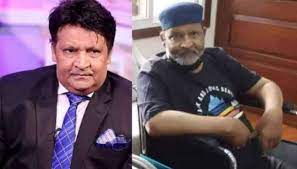 Pakistan’s legendary comedian Umar Sharif has been admitted to a German hospital after his health condition deteriorated during his flight to the United States.

A day earlier, Umer Sharif had left for the US via Germany by air ambulance for medical treatment.

His wife, Zareen Ghazal, was also accompanying him. The air ambulance was carrying legendary comedian Umer Sharif en route to the United States on Wednesday landed in Germany and will stay in the country for one day to give some rest to the ailing actor, said Dr Tariq Shahab, the husband of Pakistani actress Reema Khan who is overseeing arrangements for Sharif’s treatment in the US.

Umar Sharif will stay in Germany for one day and will resume his journey to the US on, said Dr. Shahab.

Umar Sharif was undergoing a medical checkup and his fresh tests were being taken at the hospital, he said, adding that these arrangements were being made by the ambulance company.