Presentation of Credentials by H.E. Mr. Sajjad Haider Khan to H.E. Mr. Alexander Lukashenko, President of the Republic of Belarus

Minsk (GNP): The Ambassador of the Islamic Republic of Pakistan to the Republic of Belarus Mr. Sajjad Haider Khan presented his Credentials to the President of Belarus, His Excellency Alexander Lukashenko.
During the short conversation after the credentials ceremony, President Lukashenko underlined the importance attached by Belarus to its relationship with Pakistan. The president highlighted the possibility of enhancing relations in the key areas of agriculture, industry, education, healthcare and pharmaceuticals. He shared his desire to see the uninterrupted growth of bilateral ties between the two countries and hoped that Prime Minister Imran Khan would be able to pay his first official visit to Minsk in the near future. 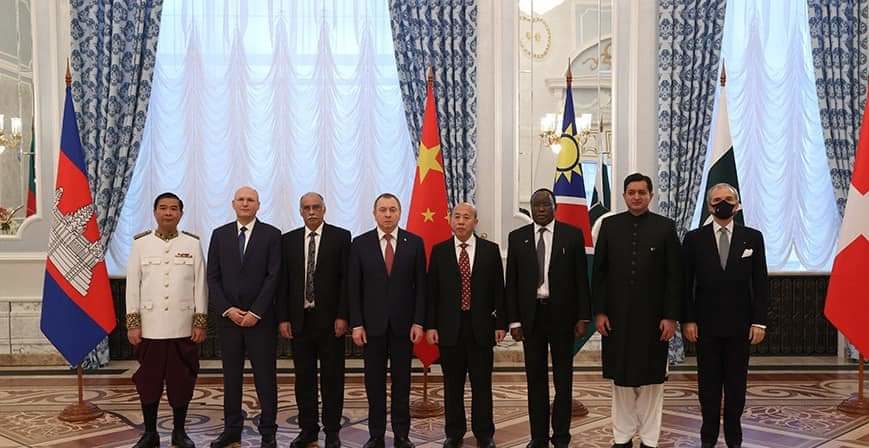 On this occasion, appreciating the momentous growth of cooperation between the two friendly countries ever since the establishment of embassies in Islamabad and Minsk in 2014 and 2015 respectively, Ambassador Khan conveyed the readiness of Pakistani leadership to further strengthen the bilateral ties in the years ahead. Highlighting the broad framework of cooperation and mechanisms in place, the Ambassador expressed his commitment to work towards increasing the momentum of bilateral cooperation in all fields including political, trade, investment and economic cooperation between Pakistan and Belarus.

Diplomatic relations between Pakistan and Belarus were formally established in 1994 and since then both countries have enjoyed warm friendly relations. In a short span of time, Pakistan and Belarus have been able to evolve the bilateral relationship into a durable partnership by establishing multiple mechanisms of bilateral cooperation including Joint Economic Commission, Bilateral Political Consultations, Joint Working Groups on Industry, Agriculture, Science & Technology and robust defense cooperation.

Ambassador Khan is a career diplomat, with over 20 years of experience. He has served in the embassies of Pakistan in Indonesia, Germany, Hungary, Syria and Saudi Arabia in different capacities besides working at the Headquarters in Islamabad in Americas Division, Africa Division, Europe Division and Human Resource Division.

Pakistan to receive extension in GSP+ Status till 2023