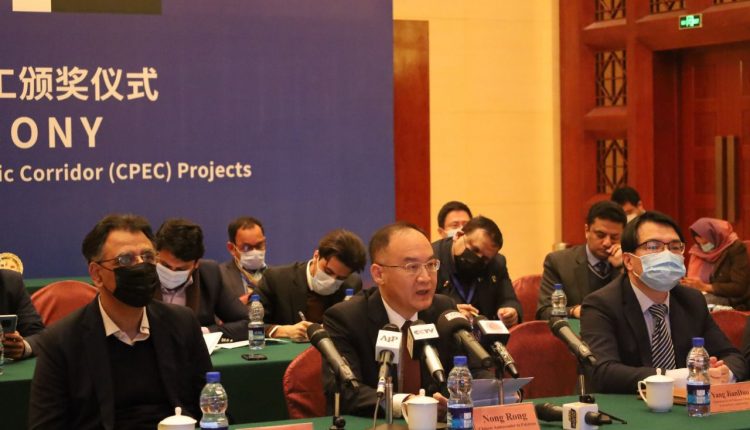 Islamabad, 29 December 2021 (GNP): China’s Ambassador in Pakistan Nong Rong said that Prime Minister Imran Khan’s commitment to CPEC is outstanding. He said that during this year, the CPEC has always been the focus of our two countries. Adding further Ambassador said that  Pakistan and China both want to promote cooperation in agriculture and the digital economy through the CPEC.

Ambassador Nong Rong was speaking on the occasion of an award ceremony held by the Chinese Embassy in Islamabad to recognize the outstanding work of the staffers for the development of CPEC.

The aim of the CPEC is to “comprehensively build the health, industrial, trade, digital, and green corridors, so as to build the CPEC into a demonstration project for high-quality development of the Belt and Road Initiative”, he added.

The Chinese envoy appreciated PM Imran Khan’s commitment towards the CPEC, saying the premier “chaired a series of meetings on CPEC, including the one for industry development, and held two seminars with Chinese entrepreneurs”. 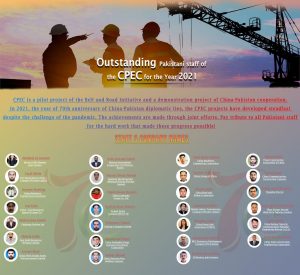 Speaking on the occasion, China’s National Development and Reform Commission Director-General Ying Xiong said that the China-Pakistan Economic Corridor (CPEC) was enjoying “smooth operation” despite the severe impact of the coronavirus pandemic that hit the world in December 2019.

Ying said despite Covid-19, the CPEC construction projects did not stop and added that neither the Pakistanis faced layoffs nor the Chinese workforce was withdrawn due to the pandemic. “The CPEC construction has bucked the trend with continuous new achievements,” the official added.

Appreciating the ties between Islamabad and Beijing, Ying said, “China’s development and growth is to the interest of Pakistan, and it is also China’s sincere hope that Pakistan can enjoy stable development to become prosperous.”

“Energy projects are now in normal and stable operation. Major progress has been made in transportation infrastructure cooperation. Cooperation in industries and other fields has been advancing rapidly. Agriculture, as well as science and technology cooperation, has been hedging forward steadily,” he said while listing the achievements under CPEC. 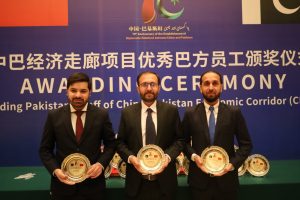 The official said that international cooperation and coordination, as well as security-related issues, have been implemented in an orderly manner. He also appreciated the “outstanding staff awarded” at the ceremony, saying their “dedication, innovation and devotion” reflected the strength of the CPEC.

All relevant authorities in China, as guided by the consensus reached by the leaders of the two countries, and in the spirit of the 10th JCC Meeting, are closely following the “1+4” cooperation layout, centering on CPEC construction and focusing on Gwadar Port, energy, infrastructure development, and industrial cooperation.”

He said under the CPEC, China is “dedicated to building healthy corridors, actively creating industrial corridors, speeding up the flow of trade corridors, earnestly developing digital corridors, promoting the formation of green corridors.”