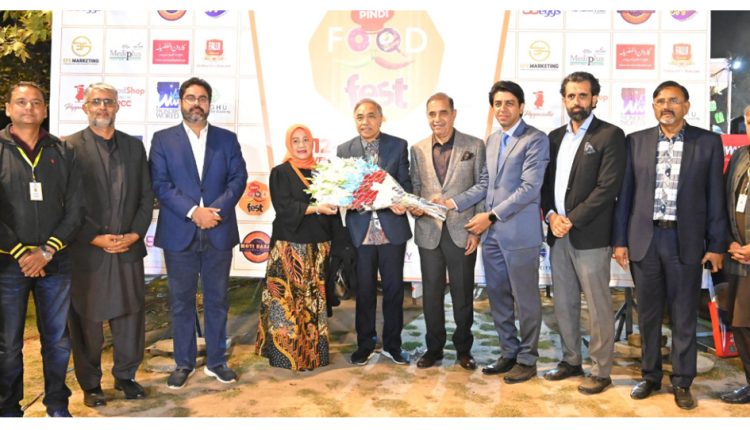 Rawalpindi, 13 November 2022 (GNP/TDI): The women of the Indonesian Embassy stunned the audience when they performed “Angklung” to traditional tunes and the Beatles’ “Ob-La-Di Ob-La-Da” at the 2nd Pindi Food Fest 2022 in Ayub National Park, Rawalpindi.
Among the performers during the Festival were Chef Gulzar, Shan Khan, Bakhsi Brother, Mash Baloch, and Hassan Darbuka. Natsha Baig is a well-known vocalist from Pakistan.

The construction of the Indonesian angklung is a bamboo frame with two to four bamboo tubes suspended inside it and bound with rattan cords.

Melodies require the cooperation of numerous musicians since each Angklung can only create one note or chord at a time.

In all its richness, Angklung captures the cooperative and social essence of Indonesian culture.

Indonesian traditions including rice planting, harvesting, and circumcision typically involve the playing of the Angklung, a musical instrument.

It is closely related to customary practices, the arts, and cultural identity. Angklung’s distinctive sound and philosophical significance led to its designation by UNESCO as a masterpiece of the human race’s oral and intangible heritage in 2010.

Bakso (meatballs), Bakwan (Indonesian pakora), Siomay, Fried Rice and Noodles, Chicken Satay, and Banana Cheese Roll are just a few of the Indonesian dishes that Kitchen Arabella MRC Pakistan will be introducing to Pakistani food lovers in 2022 as part of the second Pindi Food Festival.

As a result of their curiosity about how some of the dishes resembled Pakistani food as well as their inspiration from the unique flavours of Indonesian cuisine, many people visited the Indonesian food stand.