Rabat, 22 December 2022 (GNP): Vice Admiral Mostapha El Alami, the head of the Royal Navy of Morocco, received a visit from Chief of the Naval Staff Admiral of Pakistan Muhammad Amjad Khan Niazi on Thursday at the Royal Moroccan Naval Headquarters.

For an official visit, CNS Admiral Amjad Niazi arrived in Morocco today. Vice-Admiral Mostapha El Alami, the Naval Chief of the Royal Moroccan Navy, welcomed him upon his arrival and presented him with the Guard of Honour.

The two Naval Chiefs addressed topics of mutual interest during the meeting, including naval cooperation, regional maritime security, and bilateral cooperation, according to the Pakistan Navy Spokesperson. 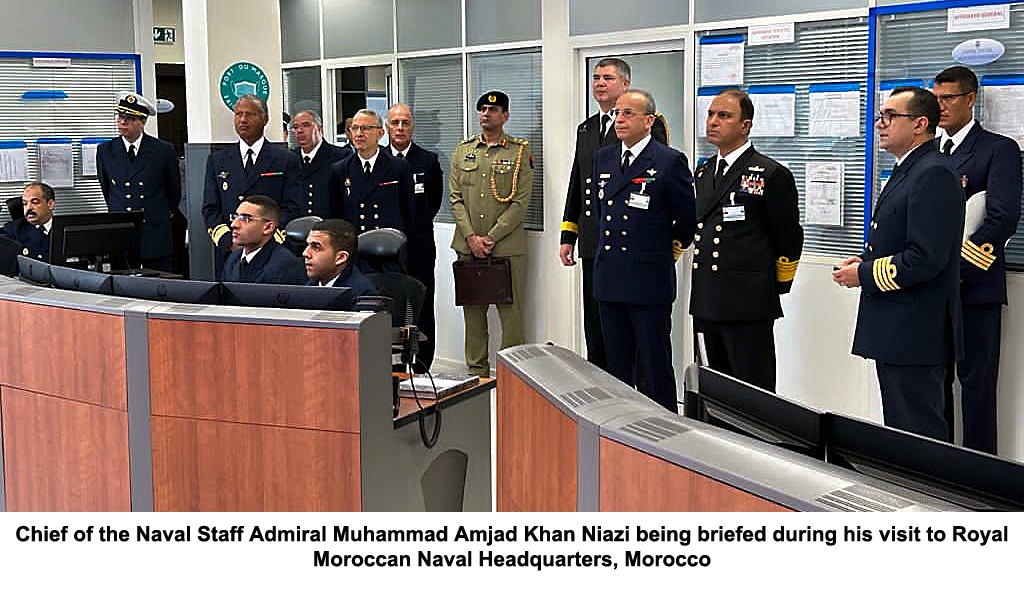 The 8th AMAN Naval Exercise and Pakistan International Maritime Expo & Conference (PIMEC-23) would be conducted in February 2023, and the Chief of Navy requested his Moroccan Navy to attend in order to advance the blue economy.

He also emphasized the need of strengthening bilateral training and exercise exchanges between the armed forces of the two nations.

Later, the Commander of Northern Maritime Sector of the Moroccan Navy was visited by Admiral Amjad Khan Niazi. Additionally, he went to a number of facilities, training centers, and Royal Moroccan Navy ships.

Admiral Amjad Khan Niazi received a thorough explanation of the functions, capacities, and training resources of the Moroccan Navy during his visit.

The visit of the Naval Chief to Morocco will strengthen and broaden defence ties between the two nations in general, and their fleets in particular.

Mohamed Karmoune, the Moroccan ambassador to Pakistan, met on Admiral Amjad Khan Niazi at Naval Headquarters in Islamabad before to the Chief of Naval Staff’s visit to Morocco.

During the discussion, the two also talked about issues of shared interest, bilateral cooperation, and maritime security in the area.

Editor at TDI and GNP | mashraf12.ma@gmail.com

Heroic welcome to Ukrainian President in US