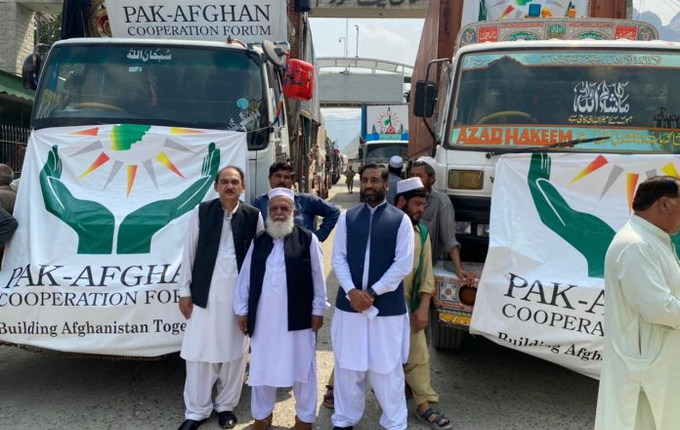 Pak-Afghan Cooperation Forum (PACF), on behalf of the Pakistan government on Sunday dispatched 17 trucks loaded with 300-ton edibles to Afghanistan on a humanitarian basis.

“Afghans are our Muslim brothers and neighbours and we have centuries-old relations with them.”

He said that the 40 years long war in Afghanistan ruined the economy, agriculture and administrative infrastructure of the country and the sudden withdrawal of international aid agencies put the entire population at risk.

Last year’s drought also added to the miseries of Afghan people who were facing a humanitarian crisis. Said Khattak

“We aim not only to provide immediate humanitarian assistance in form of food, medicine and non-food items to the people of Afghanistan but to help them to stand on their own feet and make their homeland a peaceful, stable and responsible member of the global community”, Khattak added.

That was the first step towards this noble cause, he said expressing hope that in the coming days they will also provide support in education, health and livelihood.

He said this package is a clear message to the people of Afghanistan that the people and the Government of Pakistan will never forget them in difficult times.

It was also a message to the world that instead of adopting the policy of ‘wait and see’ they must come forward to help these Afghan people, he said.

He appealed to all philanthropists within Pakistan and across the globe, to come forward and help them through generous donations to avert this humanitarian crisis.

PCB to stand aggressive against New Zealand in ICC meeting