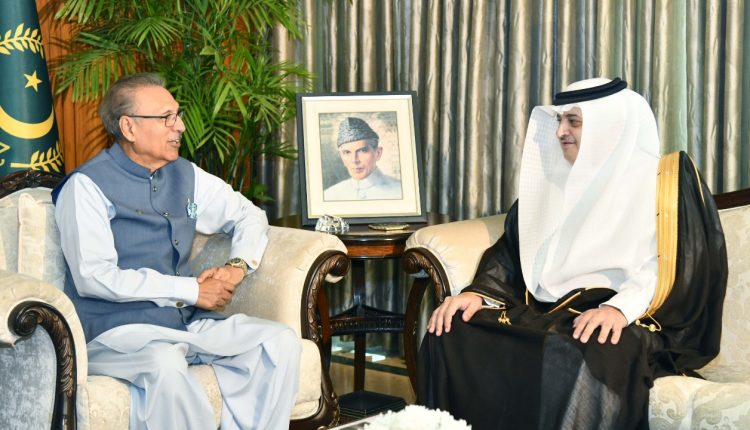 Islamabad: Pakistan and the Kingdom of Saudi Arabia (KSA) have expressed the desire to further strengthen long-standing fraternal ties which are based on common religion, shared values and culture. This was discussed at a meeting between President Dr Arif Alvi and the Ambassador of Saudi Arabia to Pakistan, Mr Nawaf bin Saeed Ahmad Al-Malkiy, at Aiwan-e-Sadr.

Talking to the envoy, the President said that Pakistan accorded utmost importance to its ties with KSA which had always supported Pakistan in difficult times, adding that both countries enjoyed significant convergence on a number of regional and global issues. He urged the need to further develop a strategic and broad-based partnership with KSA in different areas for the mutual interest of the two brotherly countries. It was emphasised to further enhance commercial bonds and encourage businessmen and chambers of commerce of both countries to interact regularly to further boost bilateral trade relations. The President also highlighted that over 2 million Pakistani diaspora in KSA was playing a significant role in the progress and development of both brotherly countries.

The President also asked the Ambassador to convey his warm regards to the Custodian of the Two Holy Mosques and His Royal Highness and shared that the people of Pakistan pray for his good health and long life.