Never will I let my nation bow before anyone: PM Imran

"People ask where is 'Naya Pakistan', it is being created in front of your eyes," Khan said

“Never have I bowed before anyone other than Allah. And InshaAllah, never will I let my nation bow before anyone,” Prime Minister Imran Khan made a promise to Pakistanis during his address to a large crowd at a community event at Washington’s Capital One Arena on Sunday. 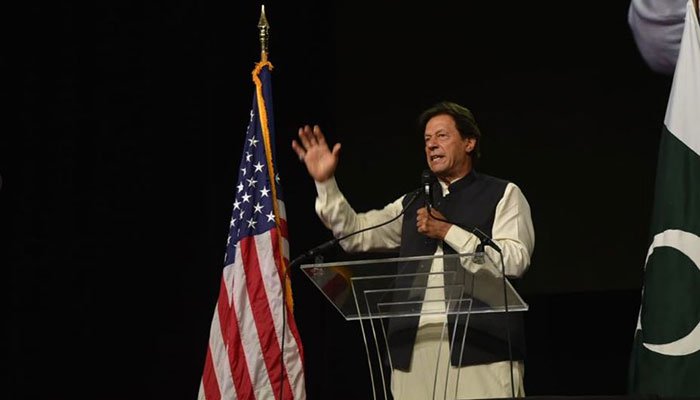 The prime minister also promised the nation that he would put the case of Pakistani people before President Trump. “I will not let you be embarrassed in front of Donald Trump,” Khan maintained.

PM Khan was warmly welcomed at the Capital One Arena. The whole arena echoed with ‘Pakistan Zindabad’ slogans chanted by the zealous overseas Pakistanis in Washington DC.

Khan said that the current government’s vision was to turn the country into a welfare state on the pattern of Riyasat-i-Madina, Radio Pakistan reported.

He said that the core principles of Riyasat-i-Madina were empathy, equality, rule of law, and looking after women, children and elderly.

”People ask where is ‘Naya Pakistan’, it is being created in front of your eyes,” he said.

In Naya Pakistan democratic norms and ideals have prospered because of meritocracy and accountability. Everyone is accountable to rule of law and there could not be two separate laws for rich and poor. Public office holders are being held accountable which is a positive step towards becoming a welfare state.

The premier reiterated that he would not give NRO to plunderers and showed utmost determination to carry forward the process of accountability without being overwhelmed by any pressure or coercion.

Talking about the debt of the country, he said PTI government inherited huge arrears and the national institutions were sinking in loss. He warned the traders that they would have to pay taxes to make the country pay back the extortionate loans which had proliferated from Rs 6,000 billion to Rs 30,000 billion during the last ten years.

PM Imran said that the education system in Pakistan did not allow the less privileged to rise up.

“There is an education apartheid. Here [in America] people are given opportunities.”

The premier said that for the first time in Pakistan, they are striving to fix the system of government schools in the country. They are attempting to introduce a uniform syllabus so that every person can have the equal opportunity to rise up. Students of Madrasas will also be brought into mainstream, he promised.

Addressing the gathering, Foreign Minister Shah Mahmood Qureshi said Pakistan has successfully curbed the peril of terrorism as it desires peace and stability in the region. In this regard, the Minister said Pakistan will continue to support Afghan peace process.

During the event, a documentary of PM Imran’s journey was also shown to the audience. GNP

A short summary of Imran Khan’s visit to America