Journalism Without Fear and Favor – GNP

Farhat Asif Director of Institute of Peace and Diplomatic Studies in his welcoming remarks highlighted the importance of journalism in the contemporary world. United Nations declared press freedom day on the recommendations of UNESCO’S on 3rd May 199. The freedom day celebrated to shows the commitment towards press freedom. 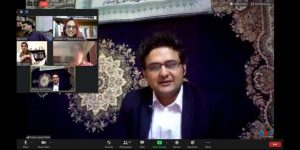 Senator Faisal Javed Khan Chairman Standing Committee on Information and Broadcasting during his remarks opined that criticism should be constructive on rational arguments. Adding in his remarks Faisal Javed said we need to move on professional journalism. Pakistan has one of the best constitutions in the world, yet there have serious questions on the implementation phase which we address by adopting a collective mechanism.

Addressing the webinar   Iqbal Khattak Country Representatives Reporters Without Borders stated Government has to set parameters for media houses that promoted unethical journalism and security must be assured for free journalism.

Sharing his views, Saadia Kamal Vice President National Press Club said journalism should be independent, without political biases and cultural influences, and the goal is for promotion of social ethic.

Khalid Jamil Journalist, Infochnage News, and Features Network said Objectivity is missing in journalism and Pakistan stands on the list where journalism is a most dangerous profession

While on concluding remarks Farhat Asif, Director Institute of Peace and Diplomatic Studies, Islamabad stated journalism is for constructive purpose rather than destructive and thanks to all the distinguished guests for sharing their valuable thoughts.