Hindutva ideology is a threat in the region, said Prime Minister Imran Khan

Islamabad 27 May 2020 (GNP): Prime Minister Imran Khan tweets today about the extreme and violent policies of the Indian government. He stated that the Hindutva supremacist Modi Govt with its arrogant expansionist policies, akin to Nazi’s Lebensraum is becoming a threat to Indians neighbors. Bangladesh through the citizenship act, border disputes with Nepal and China, and Pakistan threatened with false flag operations.

PM Imran khan called Modi as extremist and Modi is following the steps of Nazi Germany. And such expansionist and extreme Hindutva policies are becoming a threat to India’s neighboring states. It is not only the matter of its neighboring states, but India is also a huge threat to Indian occupied Kashmir. PM Imran Khan called him Hitler because of his extremely violent and supremacist acts and massive killing in Kashmir territory and his Hindutva policies are similar to Nazis. Apart from these India itself is becoming a threat to the citizens of its own country as well, such as minorities and those people who spokes in favor of Pakistan. 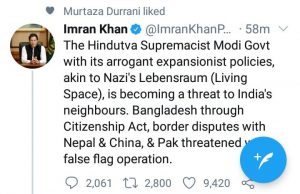 As the PM stated India is becoming a threat to its neighboring states. India has many disputes with Pakistan since the creation of Pakistan. They have conflicts over the Kashmir, LoC, water disputes, and a dispute over the Siachen. But the most important and current issues are Kashmir and LoC violation that often create disturbance not only in India and Pakistan but also in the region as well. Pakistan always raised his voice for the people of Kashmir but the Indian government is not ready to negotiate with Pakistan. It is not only Pakistan to whom India is becoming a threat, but it poses a threat to other regional states as well like India, which has conflicts with its border sharing states like Nepal and China. India has fought a war with China as well. Indian is becoming a threat to Bangladesh as well through the Indian citizenship act- which clearly shows the Modi’s rivalry with the Muslim community.