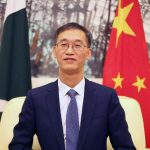 UN Secretary General to arrive in Islamabad this month