Biden says,’’ We have turned the page’’ 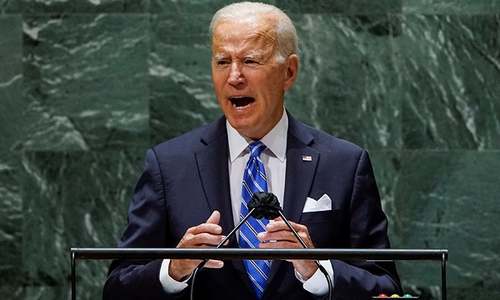 US President Joe Biden has said that we have turned the page, for the first time in 20 years United States is not facing any war. According to details the US President was addressing the UN General Assembly as President.

America would utilize all its unmatched strength and energy for our nation, what was happened that happened, we have to look forward, Joe Biden said. US President told the General Assembly that the withdrawal from Afghanistan was a turning point in history.

Rent less war would be supplanted by rent less diplomacy; he made the commitment with the UN and to his nation’s allies. Biden said, that the US would give 11billion dollars a year to the developing nations to support their response to the global climate energy.

Biden said, that the UN is a noble institution, but the world’s leaders were looking at him with curious and doubtful eyes, when he was talking about peace, despite that few days ago the US, UK and Australia were secretly negotiating on the construction of a new fleet of nuclear power submarines.

We would utilize all its resources for the betterment of Americans. US military power must be our tool of last resort, not our first, said the President. Bombs and bullets cannot defend against covid-19, Biden added.

We need to act now to get shots in arms as soon as possible, said Biden. The US had shipped more than 160 million doses of the Covid-19 vaccine abroad.

Joe Biden’s tone was the full aim when he was addressing the UN General assembly for the first time as an American President.

He encouraged his countrymen and also its allies, that he would stand with them in the time of crisis and would support the developing countries.

Keeping in view that if we thoroughly look to the American President and American Policies, that never change, only the chairs change. Ex-President Obama, Clinton, Trump, and even President Joe Biden has the same kind of policies, only the men change.