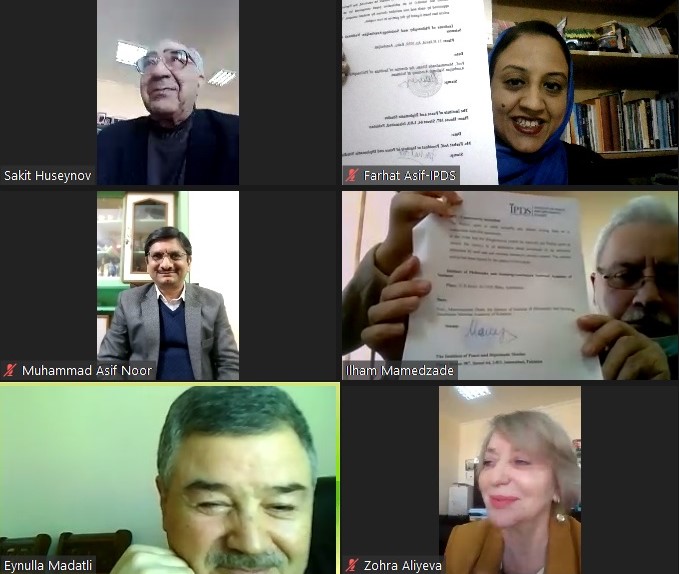 While speaking on the occasion Prof. Dr. Ilham Mammadzade said that Pakistan-Azerbaijan enjoys deep-rooted relations and this MoU will be a step further in building a strong partnership between the states, especially in the academic disciplines. Mr.Muhammad Asif Noor, Founder Director, Institute of Peace and Diplomatic Studies, congratulated the participants from Azerbaijan about the recent victory of acquiring the land of Nagorno-Karabakh and said that Pakistan stands with Azerbaijan in this hour victory while we have always stood by Pakistan in tough times during the war. He said that Institute has made several publications and organized various seminar conferences including “Kashmir and Nagorno-Karabakh: Finding a Solution”.  He added IPDS is Pakistan’s first institution to resemble both conflicts and highlighted them at the global level. As a result of the tireless efforts of the Institute, Nizami Ghanjavi Corner and Hyder Aliyev Corner has also been established at the National Book Foundation and National Library. IPDS  worked closely with the Hyder Aliyev Foundation and coordinated the philanthropic work while also established Pakistan-Azerbaijan Youth Forum. While speaking on the occasion Dr. Eynulla Madalti, Deputy Director for Scientific Affairs, Institute of Philosophy, Azerbaijan National Academy of Sciences & Former Ambassador of Azerbaijan to Pakistan while congratulating on taking this important step towards building cooperation, said that Pakistan and Turkey were two states reached out to Azerbaijan in helping in difficult times of war. He said that the collaboration amongst the institutions especially in the history and cultural studies of both states will boost our ties to a much higher level. Ms. Farhat Asif, Founder President, Institute of Peace and Diplomatic Studies, said Pakistan and Azerbaijan are brotherly countries with deep historical linkages. While Pakistan supported Azerbaijan in the Nagorno-Karabakh issue, Azerbaijan also supported Pakistan. She has invited the faculty members of the Institute to write for the research journal of IPDS Journal of Peace and diplomacy and also the opinion-based magazine The Diplomatic Insight. Dr. Huseynov Sakit, Member of the National Academy of Sciences Institute of Philosophy, and Dr. Zohra Aliyeva, Head of International Relations Department of the Institute of Philosophy of Azerbaijan National Academy of Sciences also spoke on the occasion. Both the institutes have found this memorandum as an opportunity for facilitating the relations of each other in hosting joint research work, publications, and webinars in areas of mutual interest. 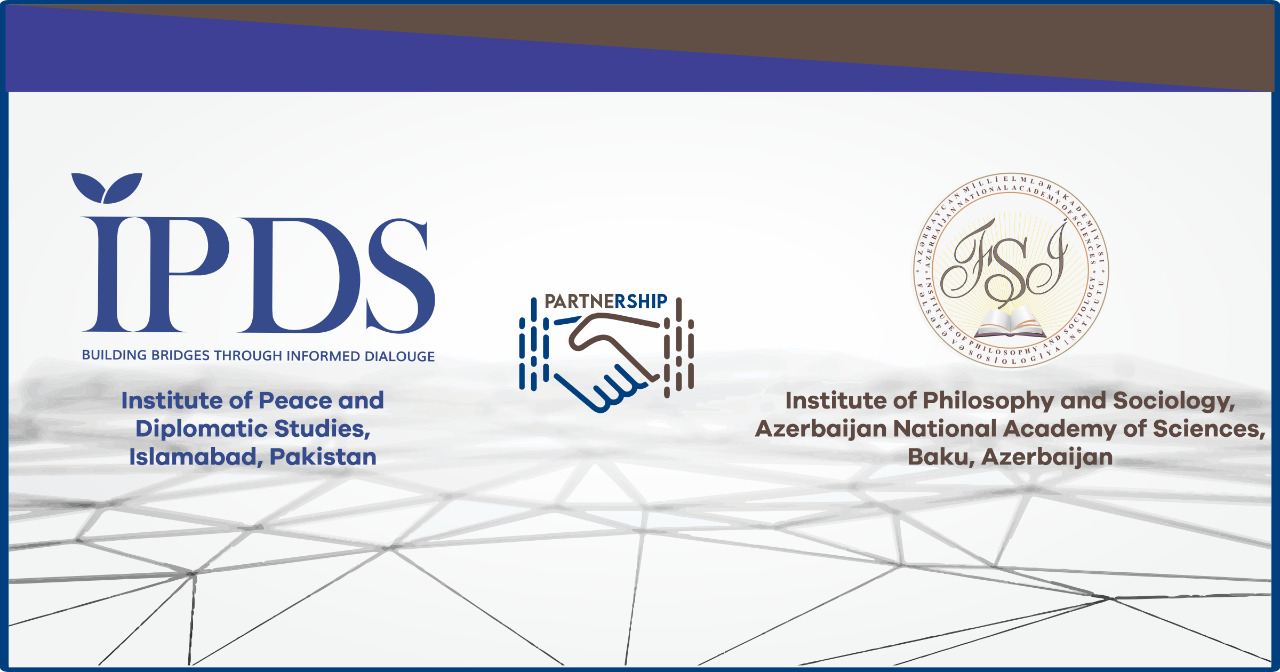 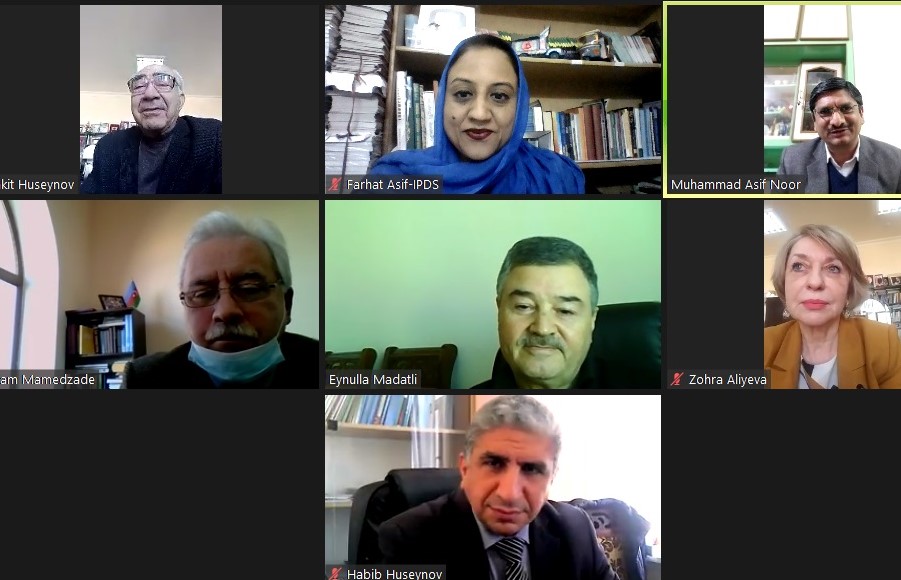 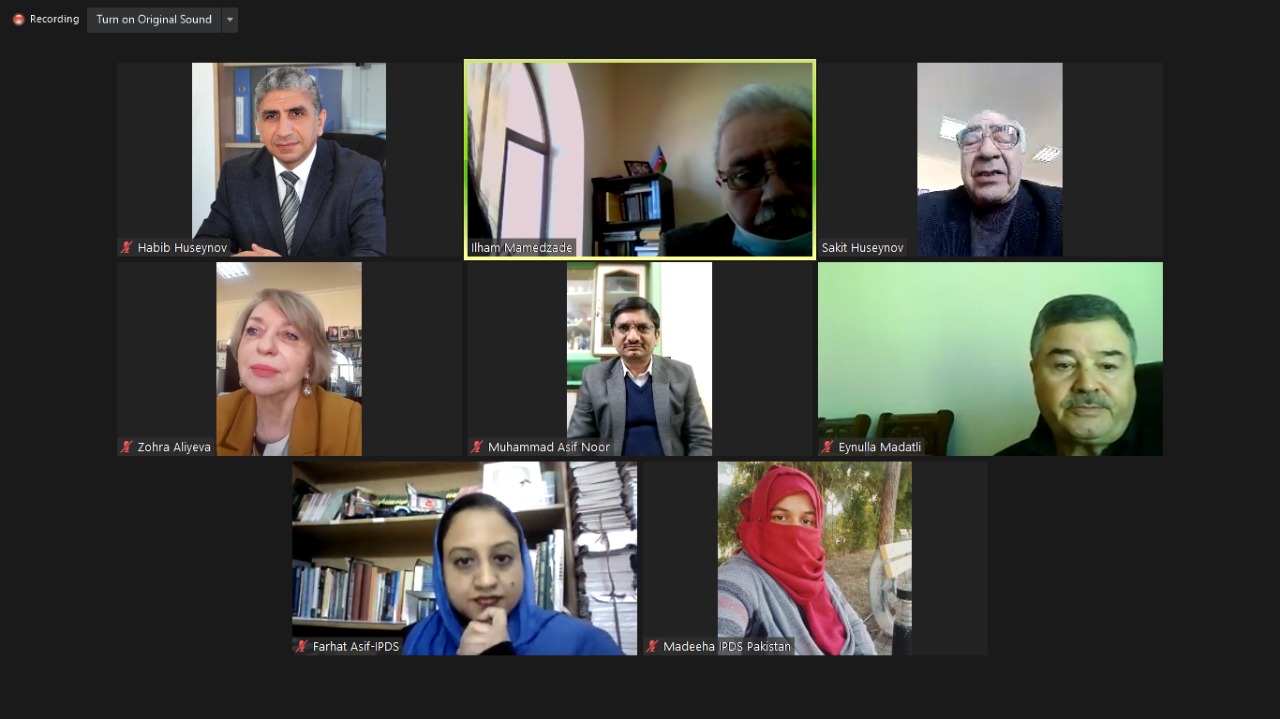 What Israel is doing in the city of Jerusalem and its holy sites are crimes need international accountability, Palestine National Council (PNC)

Announcement of Winter Vacations in Punjab-2022