A tragic tale of Sabina Neasa, Special Report by Aqeel Ahmad on the murder of Sabina 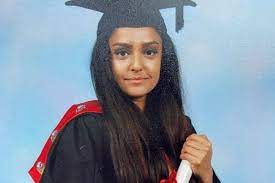 It happens in our society. But this story is so tragic and that has happened in a city like London, which calls itself the champion of human rights and especially of women rights, but yet everyday rape of women, sexual abuse, kidnapping and murders are happening in the said city on daily basis. More details are here in this special report.

This story is full of sorrow and grievances; this is the story of the great and innocent Sabina Nesa.

She was a school teacher in London and was living her life in a dignified manner, she was not aware from her fate that what would happen to her on the 17 of September of this month.

She had left her home to meet her friend, but she did not come back, because a brutal kind of man killed her and then threw her dead body in the nearby park.

A passer had seen her dead body and then informed the police, said media reports.

According to media reports, police have started the investigation of the murder case of Sabina Nesa.

Metro Politian police have also taken the footage of the said building, where the murder case of Sabina Neasa happened.

So, Police have also arrested the suspected 40-year-old man, but yet they have not reached the conclusion, that he had killed Sabina Neasa.

Her sister Yasmin Islam was talking to the media, said we have lost our sister, that sister was so loving and caring.

A professor of criminology Ayesha Gul was also talking to the media; London justice system has been failed.

If we closely see and observe such bitter kind of stories happen in our societies, Last week 34 year old girl was raped by 45 year old man at road side in Mumbai, then that girl could not bear that grief and passed away.

On 14th of August a tik Taker girl Aysha Akram was surrounded by hundreds of men at that time, when she was making some Tick Talk video. Simply women are not secure anywhere, that may be in Pakistan or India.