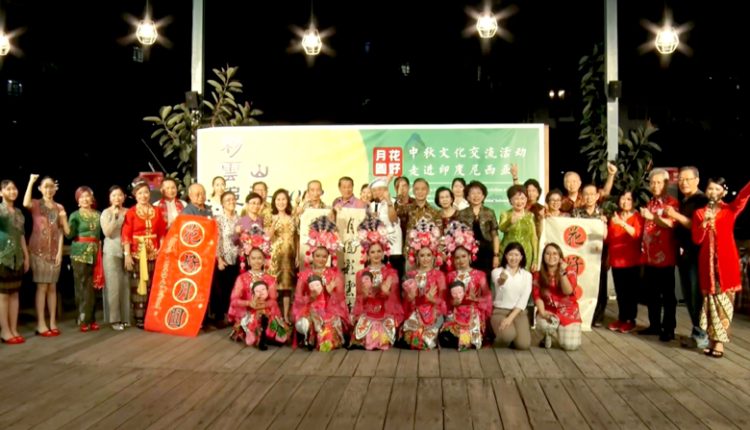 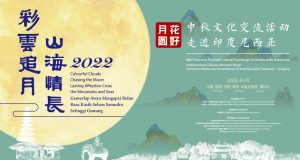 With the theme of “Colourful Clouds Chasing the Moon, Lasting Affection Cross the Mountains and Seas”, this activity included a series of activities such as Moon Worshipping, Moon Chasing at Passionate Mid-Autumn.

The activity climaxed with “Moon Chasing at Passionate Mid-Autumn” at night, in which representatives from Kunming, Dehong, and Jakarta shared the beautiful scenery of the moon in the three regions online, and they expressed best wishes to overseas Chinese and friends from the international community and shared the moment of joy.

Li Malin, deputy governor of Yunnan Provincial People’s Government, extended festive greetings and best wishes to all the guests. She said that the Mid-Autumn Festival is a traditional festival of the Chinese nation, which embodies the most profound homesickness of the Chinese people for their families. This is the strongest attachment of overseas Chinese to their motherland, the wish of everyone for a family reunion, happiness, national prosperity, and people’s security, and the spirit of reunion, patriotism, and integration of home and country of the Chinese nation over the past 5,000 years.

On the occasion of the Mid-Autumn Festival, all the guests get together to share the Chinese culture and admire the bright moon for strengthening communication and mutual understanding, gathering momentum for cooperation, and building a more beautiful home.

Li Malin said that the tourism resources of Yunnan province and Indonesia, two world-renowned resorts for recreation and business, have distinctive characteristics and are mutually complementary, so these two regions have great potential for cooperation in tourism.

Li Malin expressed her wishes that Yunnan Province is willing to work with Indonesia to tap into the opportunities for cooperation in tourism, culture, people-to-people exchanges, and other related fields.

Lu Kang, Chinese Ambassador to Indonesia, said in his speech that China and Indonesia are good neighbors, good friends, and good partners. In recent years, with the increasingly intimate relationship between high-level officials in the two countries, mutually beneficial cooperation, cultural and humanistic exchanges, and communication and cooperation in international affairs have been deepened.

In July this year, during President Joko Widodo’s visit to China, the two state leaders determined the general direction of building a community of shared destiny for the two countries, which provided further impetus to develop their bilateral relations.

This Mid-Autumn Festival activity will further enhance the two countries’ understanding of each other’s excellent culture and build a friendship bridge between the two peoples.

Djauhari Oratmangu, Ambassador of Indonesia to China and Mongolia, said that China has always adhered to the spirit of generosity, kindness, simplicity, and friendship in handling its relationship with the world. Living in China, I have a deeper understanding of how Chinese leaders treat Indonesian people with open-mindedness, friendship, generosity, and wisdom.

The 100-minute activity, “Moon Chasing at Passionate Mid-Autumn,” is a gathering of literati that transcends time and space. It is divided into four parts: “Autumn Water,” “Watching Tidal Bore,” “Lasting Affection Cross the Mountains and Seas,” and “Flying Flowers.”

The guests participated in a series of moon-related activities to appreciate the traditional festival’s cultural mood. The participating artists made friends and expressed their feelings and literary pursuits through calligraphy works, paintings, and songs. 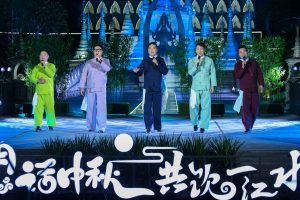 To help the audience at home and abroad enjoy the bright full moon, the activity was mainly held in the Daguan Pavilion on the banks of Dianchi Lake, which was built during the Kangxi, Yongzheng, and Qianlong periods of the Qing Dynasty, and became famous for Sun Ranweng’s long antithetical couplet.

On the night of the Mid-Autumn Festival, when overlooking the water from the Pavilion, you will admire the bright full moon reflected in the water. At the Mid-Autumn Festival this year, led by Zhao Jiahong, a well-known scholar in Yunnan, audiences from all over the world gathered together to follow the steps of Sun Ranweng and appreciate his lofty sentiments.

Meanwhile, “Moon Chasing” Flying Flower activity was held online. Internet users from all over the world were invited to admire the bright full moon together and take photos of the moon seen in different countries, on different occasions, and from different angles to convey the moral that “people far away from one another may share this moment of joy”.

At the same time, the Moon Worshipping activity was also held online. Short videos were played to show the customs of the traditional Mid-Autumn Festival in China and festivals and cultural customs related to the moon of countries around the world on new media platforms at home and abroad.